Fewer places are as historic as Boston, one of the oldest municipalities in the United States. With a front-row seat to the events that literally shaped the course of the nation’s history, there is no shortage of sights in this iconic city.

Massachusetts’s capital is one of the many stops on Regent Seven Seas Navigator cruises from Montreal to New York/New York to Montreal featuring a panoramic tour of sites that played a monumental role in our country’s past.

Begin your historic journey by taking take the 2 ½ mile walk down the Freedom Trail that connects 16 historical sites where “every step tells a story” such as the gold-domed Massachusetts State House, Granary Burying Ground, the site of the Boston Massacre and numerous churches, shops, and parks along with these prominent locations of history: 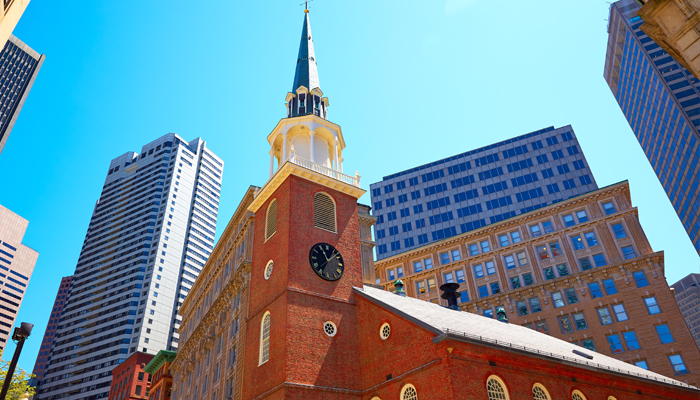 Built in 1729, the largest building in colonial Boston known as the Old South Meeting House is notable as the place where the Boston Tea Party began. Samuel Adams and the Sons of Liberty protested Britain’s unfair taxation that resulted in the subsequent dumping of 342 chests of tea in the Boston Harbor and the start of a revolution. Visitors can view antiquities and artifacts such as John Hancock’s portable writing desk and tea leaves and a tea crate label from the event in the Voices of Protest exhibit. You can also learn more about the Boston Tea Party at the Boston Tea Party Ships and Museum. Visitors can relive the 1773 event through a reenactment that includes holographic and interactive exhibits.

One of the most impressive sights on the trail is the Bunker Hill Monument, erected to commemorate one of the first major battles between American colonists and the British in 1775. As the birthplace of the phrase, “don’t fire until you see the whites of their eyes,” the granite 212-foot-tall obelisk remains a symbolic marker of the Revolutionary War.

Known as the nation’s midnight rider who alerted the town that “The British are coming! The British are coming!” in 1775, visitors can learn of Paul Revere’s patriotic past at the Paul Revere House. Featuring a tour of the 18th century home complete with documents, artifacts, silver and a look at life some 200 hundred years ago, it is the oldest house in downtown Boston.

The home of free speech and the “Cradle of Liberty,” Faneuil Hall takes its place in revolutionary history as the host of America’s first town meeting. Built in 1741, it was the site of the first protests against the Sugar Act which heralded the phrase “no taxation without representation” and later the Tea Act. Faneuil Hall also boasts a most attractive and unusual weather vane of a golden grasshopper that became the code word to spot spies during the War who were quizzed with the question “What is atop Faneuil Hall?” And no, you are not seeing double, the weather vane also sits atop the oldest standing church in Boston known as the Old North Church where Paul Revere hung two lanterns signaling the British invasion.

Launched in 1797, The USS Constitution is one of the most popular attractions and significant as the oldest commissioned warship afloat. Nicknamed “Old Ironsides” during the War of 1812 against the British, there is also a USS Constitution Museum that history buffs will find worth a visit and just a short walk from Bunker Hill.

Relive the history of the United States by sailing on one of our Canada & New England voyages.