It can be said that Alaska feeds all of the senses. Where else can you face the exhilaration of paddle boarding among the glaciers?  Feel the wind and ice on your face as you dog sled down a mountain?  Feast your eyes on bears snapping in the river at salmon under the blues of a seemingly endless sky? Or sample a mouthwatering reindeer hot dog for the first time?

Known as America’s Last Frontier, Alaska is a country of vast contrasts, one composed of infinite landscapes and blue sky, dense rainforests, epic-sized glaciers, undulating mountains and a vast wilderness with some of the most magnificent animals large and small ever seen.

Here are five reasons Alaska should be on your 2018 bucket list and if you have visited this wonderland, another reason why you need to experience it again.

Number One: The Wildlife 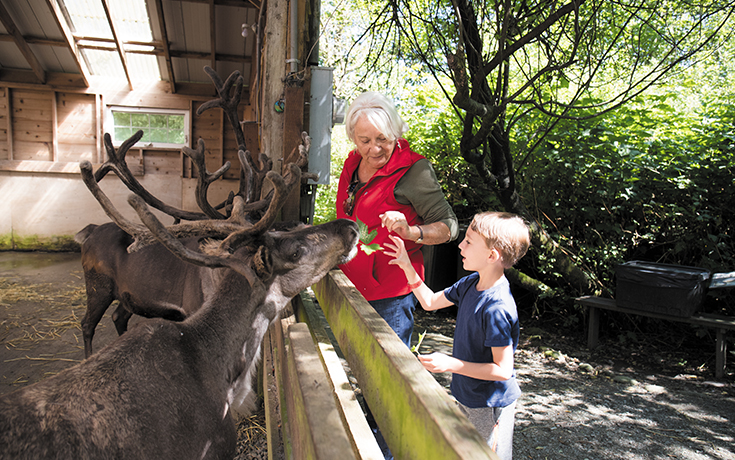 Nothing tugs at the heartstrings more like the sight of a mother Kodiak Brown Bear and her cub, a bald eagle in flight or a massive moose taking a stroll across a highway. It’s been noted that 98% of the bear population lives in Alaska (that translates into 100,000), chasing food in salmon-filled streams, slumbering in the forests and showing up when one least expects it. Black bears and polar bears are also in abundance depending on the geography.

Moose are said to be the most prevalent creatures in Alaska, and like deer, making brazen appearances in the more urban cities like Anchorage or waiting for an Instagram moment in Kincaid Park. The sighting of a humpback whale is a true “wow” moment and if lucky, you might catch an Orca or two on a boat tour of Kenai Fjords National Park. Caribou (900,000 and counting), wolves, sea otters, walrus, bison, mountain goats and Dall sheep are just a few of the animals who call Alaska home.

Simply put, the adjectives vast, massive and unspoiled used to describe the nation’s largest wilderness do not do Alaska justice. Serving as a scenic backdrop for wildlife, migratory birds, rivers and human activities, Alaska is twice the size of Texas with almost 80 percent of the land untouched and be warned, untamed.  Denali National Park is the nation’s third largest and one of the best places to take in the grandeur via rafting, canoeing, a breathtaking “flightseeing, tour” hiking, bicycling or by four wheels.  Attention is paramount as any number of four-legged residents could cross your path.

Alaska is synonymous with majestic mountain peaks (the aforementioned Denali/Mt. McKinley being the highest in the U.S.) and home to 17 of the largest 20. This translates into not-for-the-faint-of heart activities such as mountain climbing, hiking or viewing through the window of a helicopter, tram or on the deck of Seven Seas Mariner®.  In terms of experiences, nothing can top the exhilaration of that first scenic glimpse and breathing in the mountain air after climbing up a trail.

A sight unseen by even the most seasoned travelers is the most classic of the Alaskan experience known as glaciers. Photo opportunities await as the state’s 100,000 glaciers can be appreciated by ice climbing, hiking, rafting or kayaking. If you’d like to see glaciers in one place, Glacier Bay National Park and Reserve houses some fifty wonders of nature on the part of a 25-million acre World Heritage Site. Keep your ears tuned for the growling of the seals and the calling of the humpback whales.

Alaska is a true adventurer’s paradise with activities unlike anywhere else in the world. See the wilderness through the eyes of a team of huskies and learn what the lure of dog sledding is all about. The Alaskan tradition is celebrated in the Iditarod Sled Dog Race every March where champion dogs race from Anchorage to Nome.

Kayaking is also a popular water sport and when you add the backdrop of an iceberg or glacier, it takes the experience to new heights. Salmon fishing, panning for gold, zip lining, and sailing through the Inside Passage, the longest fjord in North America, are just a few of the endless – and epic – experiences that can be found in Alaska.

For a limited time, upgrade your view to explore America’s Last Frontier aboard the newly refurbished Seven Seas Mariner® with a FREE 3-Category Suite Upgrade on select Alaska voyages.