Synonymous with beauty, adventure, surfing and tropical serenity, Hawaii has long held an allure like no other. More importantly, it is ripe with historical significance as Oahu Island was the scene of one of the most pivotal attacks in United States history.

If you are taking a Regent Seven Seas Cruises voyage in the Pacific aboard Seven Seas Navigator®, the shore excursion Pearl Harbor and City Highlights excursion will be one of the more memorable experiences. The attack on the Pearl Harbor by the Japanese navy on December 7, 1941 signaled the US entrance into World War II and changed the course of history. Some seventy years later, you can still visit the monument and view the wreckage of the sunken USS Arizona, learn about the attack at the Pearl Harbor Visitor Center and the Punchbowl National Cemetery where you can view the moving “Courts of the Missing,” the final resting place for more than 25,000 soldiers from three wars. You can also tour the USS Missouri Event and board the famed “Mighty Mo” ship where General Douglas MacArthur accepted the official surrender of Japan.

While there, be sure and visit Hawaii’s most populated city, Honolulu (also known as “Sheltered Bay”) the main city of Oahu, offering everything from luxury shopping to water sports (snorkeling and surfing) and scenic hiking jaunts. Or take the Panoramic Honolulu tour via the comfort of an air-conditioned vehicle and see Iolani Palace, Kawaiahao Church and China Town along the way.

Hawaii’s second-largest city, Hilo, is a contrast from Honolulu, offering off the beaten path, hidden gems. Filled with lush greenery, scenic sea cliffs and incredible waterfalls, Hilo has a low-key laid back vibe. The Secrets of Puna tour offers up close and personal look at the area’s natural beauty beginning with a scenic excursion down famed Banyan Drive viewing areas created by volcanic eruptions along the way. And where else can you snorkel in a thermal pond or dine at a macadamia farm? 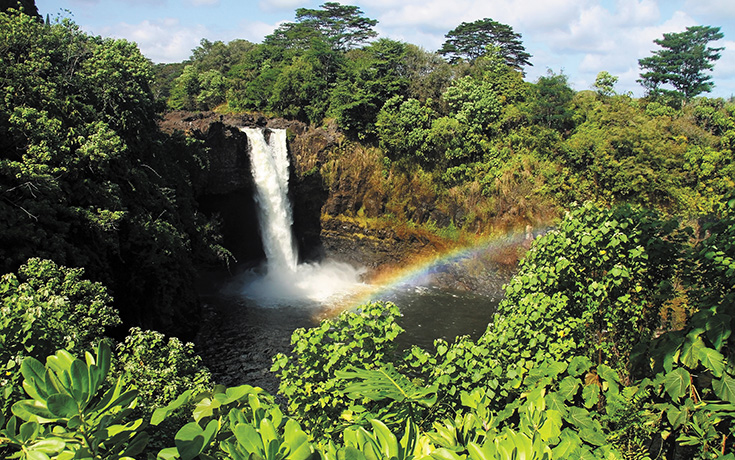 Hilo also boasts an interesting collection of monkeys, parrots, reptiles and Bengal tigers at the 12-acre Pana’ewa Rainforest Zoo and Garden. The city is also known as a survivor of two tsunamis (1946 and 1960, the latter devastating most of the island) and you can learn more at the Pacific Tsunami Museum. For a truly hidden experience, check out Kaumana Caves Park which is free, open 24 hours a day and created by the eruption of the world’s largest volcano in 1880. The Volcanoes National Park Odyssey is another choice excursion, offering a scenic drive on the 11-mile Crater rim followed by a walk on of Hawaii’s natural wonders, the Thurston Lava Tube and a visit to the Mauna Loa Macadamia Nut Factory.

And last but not least, be sure to catch four of the majestic waterfalls in the rainforest outside of Hilo in the Waterfalls Spectacular tour. It’s truly a one of a kind experience.

View a list of all-inclusive voyages sailing to Hawaii.