The exceptional architecture, rich history and immense beauty of St. Petersburg is better seen than told, which is why we’ve collected seven images to inspire your next trip to Peter the Great’s “Window on Europe.” As the capital of the Russian Empire for over 200 years, St. Petersburg is known as Russia’s artistic and intellectual center making it the perfect destination to explore aboard the luxurious all-suite ships of Regent Seven Seas Cruises®.

The world-famous Hermitage Museum is the “Crown Jewel” on the museum list in St. Petersburg. Founded in 1764 as a private museum of Catherine the Great to which only she and her closest courtiers had access, today it’s Russia’s largest art museum featuring  gallery after gallery of famous Impressionist, Post-Impressionist, and Modern works by Renoir, Monet, Gauguin, Van Gogh, Matisse, Picasso, and other big names in the history of art.

Peterhof Palace, the magnificent residence of Peter the Great, lies in the flat, forested countryside outside of St. Petersburg. The main palace features a wealth of spectacular sights, such as the intricately gilded main staircase and an opulent Throne Room adorned with royal portraits; outside, the gorgeous Peterhof Gardens features both French and English influences and is punctuated with ornamental ponds and cascading fountains.

The St. Isaac Square in the very center of the city is dominated by the magnificent St. Isaac Cathedral designed by French architect August Montferrant. The stunning Cathedral is named after St. Isaac of Dalmatia whose Saint’s Day coincides with Peter the Great’s birthday.  The church is filled with hundreds of impressive 19th century works of art, exquisite marble and impressive mosaic icons.

Catherine’s Palace was the lavish summer residence of the imperial family until the time of the last tsar. Expanded and renovated, first by Peter’s daughter Elizabeth and then by Catherine the Great, the palace is truly breathtaking. The stunning baroque facade is adorned with a profusion of atlantes, columns, pilasters and ornamental window framings. The architect used pure gold for the exterior gilding, eliciting complaints from visitors that the palace blinded their eyes on sunny days.

Church of Our Savior on Spilled Blood

The Church of Our Savior on Spilled Blood is probably the only building in the city that stands out so much in its architectural and spatial environment with its silhouette, composition and rich decor. This marvelous Old Russian-style church was built on the spot where Emperor Alexander II was assassinated. Built in 1883-1907, the church is designed in the spirit of the sixteenth and seventeenth century Russian architecture, inspired particularly by the St. Basil Cathedral in Moscow’s Red Square. 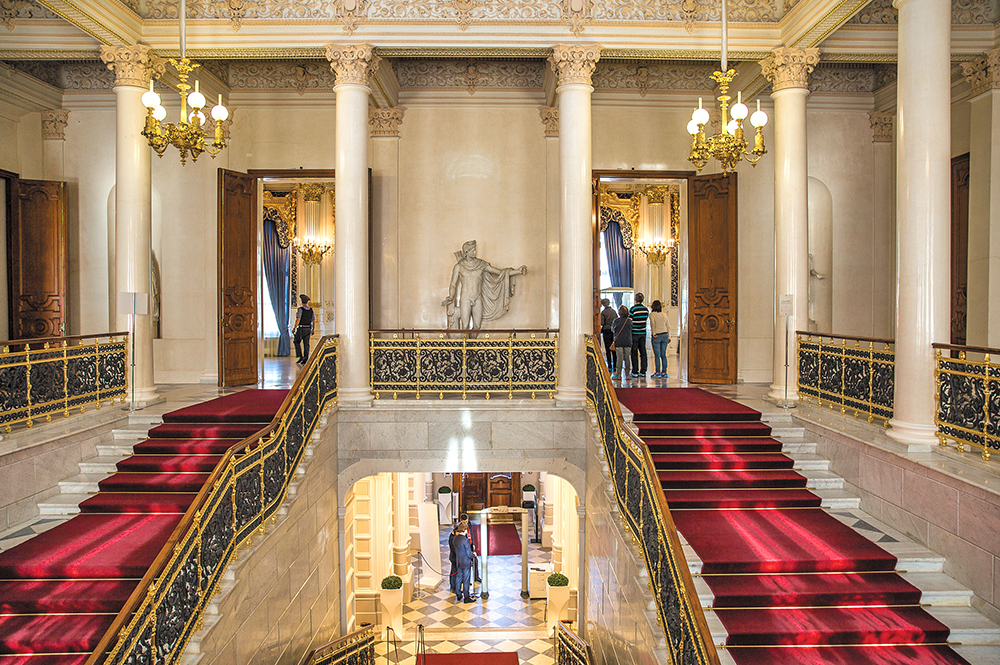 Shuvalov Palace is a magnificent architectural gem on the Fontanka River where billionaire Viktor Vekselberg has placed his priceless collection of Fabergé Eggs on display. The stunning palace is a truly fitting setting for the world’s largest collection of works by the House of Fabergé, master jewelers whose clients included the Russian tsars. Included in the display are fifteen Fabergé eggs, nine of which are the famous Imperial Fabergé eggs previously owned by the Romanov family.

The Canals of St. Petersburg

St. Petersburg is built around a network of canals and rivers, with a total length of about 186 miles. They contribute to the unique atmosphere creating a glittering mirror in which the golden domes and fairytale palaces of the city are reflected. A cruise along the Moika and the Fontanka Rivers is another chance to appreciate history and splendid architecture of this beautiful city.