Welcome to tantalizing Taormina –the Sicilian city that leaves a lasting impression thanks to its stunning scenery, captivating cultural highlights and delectable cuisine.

Before finally becoming a part of the Italian Republic in 1860, Sicily was occupied by the Phoenicians, the Greeks, the Romans, the Normans, the French and the Spaniards. Perched on the side of Monte Tauro, the sea is its sparkling backdrop, while on land its alluring architecture symbolizes its long and diverse history of battles, invasions and territorial claims.

Take time to stroll down Corso Umberto I, the city’s charming main thoroughfare. At the top of the street is the Palazzo Corvaja that now houses the Sicilian Museum of Art and Popular Traditions while the other end features the Piazza del Duomo with its 13th century cathedral and Baroque fountain. Tour the open-air Teatro Greco, which was originally built by the Greeks in the 3rd century BC and later enlarged by the Romans, and enjoy breathtaking views of Naxos Bay and Mount Etna in the distance.

As Europe’s largest active volcano, Mount Etna itself is well worth a visit. According to Greek mythology, the volcano is home to the giant Cyclops whose all-seeing eye protected the island from further damage when it erupted. Today, Italians still refer to Mount Etna as the gigante buono (the good giant), as the resulting fertile volcanic soil provides an abundance of agricultural crops. This emblematic mountain of cones and craters stands at over 10,800 feet above sea level.

From the diversity of the fresh catch from the sea to the pork from the pigs that roam the mountains to the luscious fruits, grapes, citrus and vegetables that thrive from the volcanic fertile soil, the dishes and culinary delights of Sicily are incredibly pleasing on the palate and are a reminder of the feasting tradition of its citizens. Some examples of antipasti meat and cheese platters are arancini (deep fried rice balls) and crostini with various toppings like bottarga (cured tuna roe) or caponata (eggplant, onions and tomatoes mixed with olive oil) – complemented with a glass of dry Marsala or a local red or white wine. Main course choices range from salsicce (pork with wild herbs) to sardines, tuna and pesce spada (swordfish) or a top a pasta like pasta con le sarde (pasta with sardines) or pennette  all’isolana (pasta with tuna, tomatoes & capers). The most noted pasta classic is pasta alla norma. For a sweet memory, the creamy gelato, cassata siciliana (semi-frozen ice cream cake) or the sweet cannoli are all worth the caloric splurge. And if nothing else, peel a juicy blood red orange, a Sicilian specialty. Enjoy Taormina and Buon Appetito! 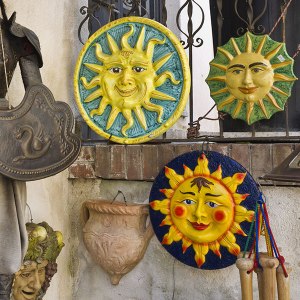 SIP:  Marsala. This wine is fortified—meaning grape brandy has been added during the distilling process. This is the country’s gift to wine drinkers around the world, ironically thanks to expatriate Englishman John Woodhouse who developed the procedure. It ranges in style from dry to sweet with three different types to be noted. White grapes make the amber colored Ambra and the golden-hued Oro while the ruby colored Rubino is made with red grapes. Hailing from the nearby town of Marsala, hence its name, this Sicilian star vino is multi-layered. The Marsala Superiore or Superiore Riserva are delicious to sip as an aperitif or after dinner drink while the Marsala Fine is used in cooking savory dishes like Veal Marsala or in sweet desserts like the foamy parfait Zabaglione. Salute! 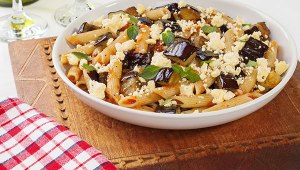 SAVOR: Pasta Norma or Pesce Spada (Swordfish) or Tonno (Tuna). It really is all about pasta or seafood here and none disappoint. The feted Pasta Norma is especially unique to the area and named after the 1831 opera “Norma” by famed Sicilian composer Vincenzo Bellini. Offered on every restaurant menu, it celebrates the Sicilian bounties of eggplant, tomatoes, basil and ricotta cheese served as a sauce usually over fusilli (little spring shaped) pasta. Pesce Spada (Swordfish) and Tonno (Tuna) prominently swim through the straights of Messina and as regular fisherman’s catch are as fresh as can be whether simply grilled with olive oil and lemon or topped with local capers and juicy tomatoes. Buon Appetito!